From Encyclopedia of world subcultures
Jump to: navigation, search

Teddy Boy (also known as Ted) is a British subculture typified by young men wearing clothes that were partly inspired by the styles worn by dandies in the Edwardian period, which Savile Row tailors had attempted to re-introduce in Britain after the Second World War.[1] 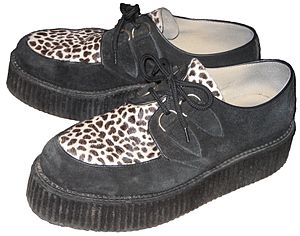 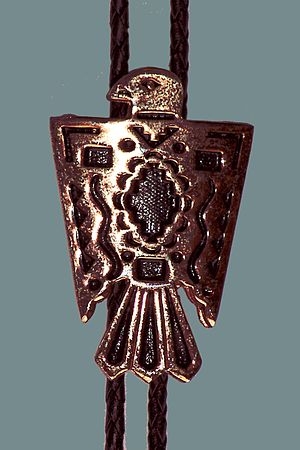 It is sometimes inaccurately writtenTemplate:Fact that the Teddy Boy style and phenomenon appeared in Britain during the mid 1950s as a rebellious side effect to the introduction of American Rock'n'Roll music. The Teddy Boy predates this and was a uniquely British phenomenon.[2]

The subculture started in London in the early 1950s, and rapidly spread across the UK, then becoming strongly associated with rock and roll. Originally known as Cosh Boys, the name Teddy Boy was coined when a 1953 Daily Express newspaper headline shortened Edwardian to Teddy.

Wealthy young men, especially Guards officers, adopted the style of the Edwardian era.Template:Citation needed The Edwardian era had been just over 40 years earlier, and their grandparents, if not their parents, wore the style the first time around. The original Edwardian revival was far more historically accurate in terms of replicating the original Edwardian era style than the later Teddy Boy style. It featured tapered trousers, long jackets that bear a similarity to post-war American zoot suits and fancy waistcoats.

There are differing accounts of where the Teddy Boy style actually started and the ensuing pattern of geographical expansion. Some writersTemplate:Who maintain that the first Teds emerged in the East End and in North London, around Tottenham and Highbury, and from there they spread southwards, to Streatham, Battersea and Purley, and westwards, to Shepherd's Bush and Fulham, and then down to the seaside towns, and up into the Midlands until, by 1956, they had taken root all over Britain.[3] There is however now more evidenceTemplate:Citation needed to support the view that the working class Edwardian style and fashion actually started around the country at about the same time. Part of the reason that South London is seen as the birthplace of the working class Edwardian style is because the popular press of the day reported the emergence of the style. However, there are many reports of the style being adopted in other parts of the country in the early 1950s with young men wearing tighter than normal trousers, long jackets, 'brothel creeper' shoes and sporting Tony Curtis hairstyles.

In 1953, the major newspapers reported on the sweeping trend in men's fashion across all the towns of Britain, towards what was termed the New Edwardian look. However the working class Edwardian style had been on the street since at least 1951, because the style had been created by working class teenagers and not by Saville Row or fashion designers such as Hardy Amies.Template:Citation needed

Although there had been youth groups with their own dress codes called scuttlers in 19th century Manchester and Liverpool,[4] Teddy Boys were the first youth group in Britain to differentiate themselves as teenagers, helping create a youth market. The US film Blackboard Jungle marked a watershed in the United Kingdom. When shown in Elephant and Castle, south London in 1956, the teenage Teddy boy audience began to riot, tearing up seats and dancing in the cinema's aisles.[5] After that, riots took place around the country wherever the film was shown.[6]

Some Teds formed gangs and gained notoriety following violent clashes with rival gangs which were often exaggerated by the popular press. The most notable were the 1958 Notting Hill race riots, in which Teddy Boys were present in large numbers and were implicated in attacks on the West Indian community.[7] The violent lifestyle was sensationalised in the pulp novel Teddy Boy by Ernest Ryman, first published in the UK in 1958. 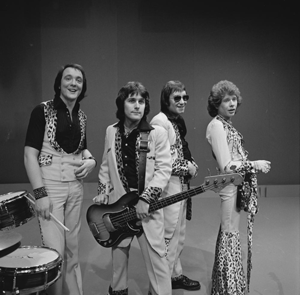 Teddy Boy clothing included drape jackets reminiscent of 1940s American zoot suits worn by Italian-American, Chicano and African-American communities (such as Cab Calloway or Louis Jordan), usually in dark shades, sometimes with a velvet trim collar and pocket flaps, and high-waist "drainpipe" trousers, often exposing the socks. The outfit also included a high-necked loose-collared white shirt (known as a Mr. B. collar, because it was often worn by jazz musician Billy Eckstine); a narrow "Slim Jim" tie or western bolo tie, and a brocade waistcoat.[9] The clothes were mostly tailor-made at great expense, and paid through weekly installments.[10]

Favoured footwear included highly polished Oxfords, chunky brogues, and crepe-soled shoes, often suede (known as brothel creepers). Preferred hairstyles included long, strongly-moulded greased-up hair with a quiff at the front and the side combed back to form a duck's arse at the rear. Another style was the "Boston", in which the hair was greased straight back and cut square across at the nape.

The Teddy Girls' choices of clothes were not intended strictly for aesthetic effect; these girls were collectively rejecting post-war austerity. They were young working class women from the poorer districts of London. They would typically leave school at the age of 14 or 15, and work in factories or offices.[13] Teddy Girls spent much of their free time buying or making their trademark clothes. It was a head-turning, fastidious style from the fashion houses, which had launched haute-couture clothing lines recalling the Edwardian era.[14] 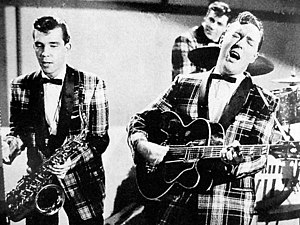 Although Teddy Boys became associated with rock and roll music, prior to the advent of that genre, Teddy Boys mainly listened and danced to jazz and skiffle music.[15] A well-known dance that the Teddy Boys adopted was The Creep, a slow shuffle that was so popular with Teddy Boys that it led to their other nickname, Creepers. The song "The Creep" came out in 1953, and was written and recorded for HMV by Yorkshire-born big band leader and saxophonist Ken Mackintosh. Although this was not a rock and roll record, it was widely taken on by the Teddy Boys of the time. From 1955, rock and roll was adopted by the Teddy Boys when the film Blackboard Jungle was first shown in cinemas in the UK, and Teddy Boys started listening to artists like Elvis Presley, Bill Haley and Eddie Cochran.

Template:Refimprove sectionDuring the 1970s, rockabilly music enjoyed a renewed period of popularity and there was a resurgence of interest in Teddy Boy fashions. The look was promoted by Vivienne Westwood and Malcolm McLaren through their shop Let it Rock, on London's King's Road. This new generation of Teds adopted some aspects of the 1950s but with a large glam rock influence, including louder colours for drape jackets, brothel creepers and socks and shiny satin shirts worn with bootlace ties, jeans and big-buckled belts. George Harrison and John Lennon emulated this style in the early formation of the Beatles.[16] The 1970s Teddy Boys often sported flamboyant pompadour hairstyles in addition to long sideburns[17] and were alleged to prefer hairspray over grease to style their hair. In the late 1970s, the new generation became the enemies of the Westwood and Sex Pistol-inspired punk rockers. In the spring of 1977, street battles between young punks and aging teds happened on London's King's Road, where the earliest new wave shops, including Westwood and McLaren's Sex (by now not selling zoot suits and ted gear anymore), were situated.

In the late 1980s, there was a move by a number of Teddy Boys to revive the 1950s Teddy Boy style. In the early 1990s, a group of Teddy Boy revivalists in the Tottenham area of north London formed 'The Edwardian Drape Society' (T.E.D.S). The group concentrated on reclaiming the style which they felt had become bastardised by pop/glam rock bands such as Showaddywaddy and Mud in the 1970s. T.E.D.S. was the subject of a short film, The Teddy Boys, by Bruce Weber.[18]